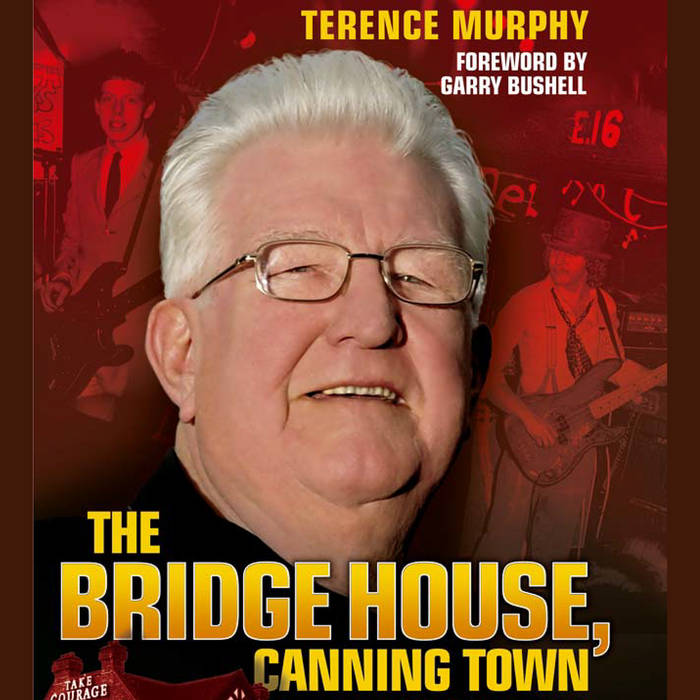 This is an eBook edition about the famous Bridge House Tavern in Canning Town London E16 as written by the landlord Terry Murphy.

The download includes Acrobat PDF, EPUB and MOBI versions of the book. The original is now out of print. the digital version includes extra images.

It comes with free downloads of a live gig recorded at the Bridge by pub regulars RamRod, made up from members of the Rory Gallagher band. Rory was also a much loved regular and played with the band on their opening night.

Music-drenched East End landmark pub The Bridge House, E16, was the most important British pub rock venue of the 1970's - and the first pub in the world with its own record label.. U2 played their first British gig there. Chas'n'Dave recorded a whole live double album there. Iron Maiden, Dire Straits, Depeche Mode and Cockney Rejects began there, founding a bewilderingly wild panorama of new music movements: brutal, guitar-heroic or purely melodic.

Now its legendary owner-impresario and former boxer Terence Murphy, one of the pivotal East End Murphy dynasty, gives us the first biography of his unforgettable live venue.

The Mod revival, the Punk/Skinhead movement and the New Wave of British Heavy Metal - Bridge House was the absolute, inspirational centre of these surging new youth cults, all improbably different from one another. And although Joe Brown had installed all the pub's electrics in a former life as an apprentice, and although Murphy remembers regretfully and repeatedly turning down The Police - "With a name like that we couldn't give them a gig in Canning Town"- Bridge House's power as a seminal rock venue went far beyond an East End working class music ethic.

With his large collection of hitherto-unseen photos and his own astute memories, Murphy lets rip a musical free-for-all, his collage of star artists becoming powerfully psychedelic. Jeff Beck, Ginger Baker, Rory Gallagher jamming sensationally with the guys. Jagger and Richards showing up to support Charlie Watts' band Rocket 88. Police waiting to arrest Steve Marriot at his Blind Drunk gig, or Billy Bragg winning a talent contest, or Modern Romance handing Murphy their silver disc for all his help. Depeche Mode being signed by Mute there, or Paul Young with the Q Tips in a 9-month residency or Tom Robinson fine-tuning "2.4.6.8" there. A secret gig by Alex Harvey; a regular stint by Huey Lewis; and Paul Jones forming the Blues Band - who are still playing more than 20 years later.

Right next door to Bridge House stands the country's most famous boxing pub, The Royal Oak. Run by Murphy's brother, it has trained the most boxing champs, including Bruno, of any outfit in the country. Not surprising then, that the Bridge House regulars Cockney Rejects had a boxer singer, and began the 'Oi' punk/skinhead movement there. Continuing the brutalist theme, psycho band Wasted Youth were formed there, its bassist and founder member Murphy's son. Iron Maiden played over 35 times with three different singers, and so began the New Wave of British Heavy Metal.

The Bridge House was a unique live venue. Tucked away under some pylons off the Canning Town roundabout in the deepest part of the East End of London was a large pub that had live music every night of the week. Managed by Terry Murphy, it was where bands such as Iron maiden, The Blues Band, Depeche Mode stared their careers and others such as Rory Gallagher and Stevie Marriott finished off theirs. ... more

If you like The Bridge House Canning Town eBook - Memories of a legendary Rock n Roll hangout, you may also like:

Bandcamp Daily  your guide to the world of Bandcamp